It's supposed to have been re-mapped, and I can beleive it as it really does move quite well. No receipts for it though.

No pics yet as it's in pre-Gee mode, but when it's been cleaned up I'll post some pics.

Back in the land of the boots...

Nice work Gee, this will be the new "Respectable work/client seeing, Economical, value for money, not spending much on it" run around that the A8, Project Black and many more have been then !

Love reading your threads mate you've always something in the pipeline !
SimD1978

We will need the usual pics/update though mate yeah. Cool
boothy 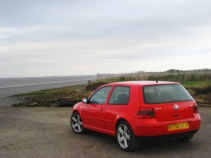 glad you got sorted buddy
Jezz

NOT IN IT TO WIN IT
mrgarf

another coloured project, looking forward to seeing the pics matey

and there was me thinking you'd run the compact for a while !!!
Geeman

...and I'm addicted to the turbo now after having drive Rach's TT.

sounds cool gee, you coming to the meet in it next sunday??
Geeman

Yeah, I should be!

Gee - I'm totally with you on the turbo front pal, each time I drive my Leon it's big grin on the face time and each time I drive my other car, (Mini Cooper Cabriolet - and yes I have kept that uber quiet for obvious reasons on here), even in sunny weather it's pants.
Geeman

You've got a Mini Convertible too? Oh the shame...

i like sunny days in the mk4 when you have the windows down and can hear the turbo spooling, its great, mpg suddenly plummits though lol

Ha, ha, ha, well there is, as with everything, a story behind it! My g/f who i live with had an opportunity to opt out of her company car and get an allowance. She's not into cars at all and was considering getting either a Ford Focus or Mazda 3! I thought I should 'educate her' and showed her some other cars that I liked more, so we went an looked at a BMW 3 series and some VW's obviously. In the end, once she'd seen the Mini's that was it and so we got a cabriolet. My experience of Mini's so far is that they are small and overpriced with poor engines (with the exception of the Cooper 'S') and really poor dealerships. Wendy likes it though, so at least that's ok. I might try and get a 'project' by the end of the summer. Wendy, amazingly, is ok with this idea!
Geeman

I already have the 18" Oz Operas and a set of coil-overs... just need new front top mounts, bushes and engine mounts, along with a cam-belt and clutch change.

The OZ's are going a matte metallic grey with either diamond cut rims or chrome powdercoating... not quite sure yet.

The bonnet, front bumper, roof, wing-mirrors and boot all need paint to make perfect, so I might as well get the roof and mirrors done black.

Yet another 'I'm not going to touch this as it's my daily' car...

will it be done for sunday gee

Nope... none of it will be done by Sunday!

gee, would a vinyl roof not be a cheaper option? wheels look nice, don't go defeating your objectives of this car though, remember why you bought it, for what reason, don't make it impractical for its purpose and end up selling it...............

so folks how long we giving him before he sells it?!

Vinyl roof would be cheaper, but there's some defects on it that need attention, so it needs paint anyway. Might just do it silver again and then vinyl it afterwards... but then there's the mirrors that need paint anyway...
_________________

Looks sweet buddy, I'm liking the plans. The roof in a different colour is a must. It works really well.
Anni-8v

sweeeet will look the nuts that. good call.
Jezz